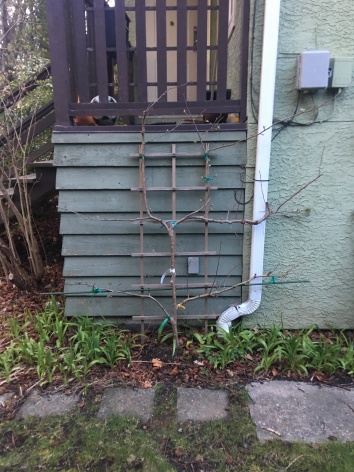 The nun Tenzin Choedon, at a crossroads near the Mamae Convent, in Aba Prefecture, Sichuan Province, sets herself on fire—this girl of eighteen—and dies.

I scroll down the blue film of words this afternoon, then pull on boots, a raincoat, and head outside to dig through black clumped earth and the fleshed roots of day lilies.

Now she is salt, water, bone. A line of charred letters. Rain falling on the trees’ blackened skin.

It falls so quietly, fingers the guttering eaves, stains the concrete path and the metal blade as it cuts through chestnut leaves which seep a dark fluid. Falls, soft, into the opened earth.

Now I bury the roots of this small apple tree—a stick and a bare root—scrape back the dirt and tamp it down, tie the espaliered arms to the wall.

It seems impossible that it will grow. And as the rain comes harder, I stand stripped and rooted, can only wait—how long—for the bud to swell and tear the bark, stiff blades of crocus to cut through earth, the quince to blood-redden.

(In Aba Prefecture, Sichuan Province, the soldiers who took her away
will not release the body for last rites.)

I put away the tools and pull the shed door closed. The light to the west is indigo, dried ink, rust.

The earth labours in the dark.

In Syria, Homs has been under siege a year now.

News comes of a massacre of women and children and some men—beaten, mutilated, throats slit.

News comes like water, a rumour, trickles through cracks and underground channels, then a torrent.

Here is a child. Here is another. Another. Look away, look away.

Their suffering does not end.

In Book One of the Georgics, Virgil tells us how to occupy the long winter months with small tasks, waiting for the spring. How to read the signs:

A crimson shadow darkens the sun.

Pale ghosts come walking through the fields at dusk.

(Think of the farmer who will plough his land a hundred years from now, harvest weapon and bone, how seed will take root, grow through socket and blue-black soil, towards the cold light.)

Sometimes the small tasks of custom and routine are not enough.

War creeps over the surface of the earth.

§ 2 Responses to Two days in spring

You are currently reading Two days in spring at kim trainor.