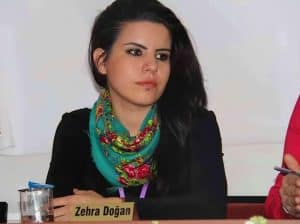 Zehra Doğan, a Turkish journalist and artist, was sentenced on March 24, 2017 to two years and ten months in prison for creating a painting of a Turkish city heavily damaged by state security forces. Despite arguing that she made the painting as part of her work as a registered journalist, Doğan was charged with having connections to the Kurdistan Workers’ Party (PKK), which is fighting an insurgency against the Turkish government. PEN America condemns Zehra Doğan’s arrest and prison sentence as an unacceptable infringement of the right of both journalists and artists to free expression.

Zehra Doğan, an ethnic Kurd, was arrested on July 21, 2016 after producing the painting, which depicts the damage inflicted upon Nusaybin, a city close to the Syrian border and populated largely by Kurds. The city was besieged by bombardments in 2016 during a period of intense fighting between the Turkish military and the PKK. Ironically, Doğan’s painting was based on an image circulated on social media by the Turkish military itself in the aftermath of operations in Nusaybin. Doğan was released from Mardin Women’s Prison on December 9, 2016, pending trial.

During her trial in February 2017, Doğan argued that in producing a painting of a real-life event based upon a photo taken and disseminated by the Turkish military, she was carrying out her work as a journalist. Nonetheless, she was sentenced to two years, nine months, and twenty-two days in prison by the Second High Criminal Court of Mardin province. In a now-deleted tweet in the aftermath of her sentencing, she wrote that she “was given [a prison sentence of] two years and 10 months only because I painted Turkish flags on destroyed buildings. However, [the Turkish government] caused this. I only painted it.”

Prior to her imprisonment, Doğan worked as a journalist in Turkey. She served as a writer and editor for Jinha, a feminist news agency staffed entirely by women and publishing news articles in English, Turkish, and Kurdish. In 2015, she was given the annual Metin Göktepe Journalism Award for her series of articles about Yazidi women escaping from ISIS captivity. The award is named for Metin Göktepe, a journalist tortured and murdered in the custody of the Turkish police in 1996. She has not allowed her imprisonment to keep her from her journalistic pursuits, having set up the newspaper Özgür Gündem Zindan (Free Agenda Dungeon) alongside other women from within prison.

Doğan’s arrest and imprisonment take place against a backdrop of ongoing suppression of the media in Turkey, particularly in the aftermath of the attempted coup of July 15, 2016. Since a state of emergency was declared in the aftermath of the attempted coup, over 180 news outlets have been shut down and more than 150 journalists and media workers imprisoned, including Ahmet Şık, Kadri Gürsel, Ahmet and Mehmet Altan, Ayşe Nazlı Ilıcak, and İnan Kızılkaya, reinforcing Turkey’s position as the biggest jailer of journalists in the world. Restrictions reached new heights in the lead-up to a crucial referendum on constitutional reforms aimed at significantly increasing executive powers. On April 16, 2017, the Turkish people voted by a narrow (and widely contested) margin in favor of the referendum and its sweeping constitutional changes.

You are currently reading Zehra Doğan at kim trainor.