I’m writing this in a small, stitched notebook made in Japan, with the words LIFE / PISTACHIO stamped across the front: the colour of dried blood on pistachio green. It’s March 16, 2020. An RVA virus called SARS-CoV-2 has slipped from bat to pangolin, a smudge of blood to human hand to lip to lung, lungs. Breathe. Breathe…..

My post in the ecopoetics series, guest-edited by Jesse Holth, can be found here at The Puritan‘s blog, The Town Crier.

“While languishing inside a grim Syrian prison, a small group  of inmates etched the names of 82 prisoners onto scraps of cloth using a chicken bone, rust, and their own blood. They hoped the list would someday make it beyond the walls of the prison, serving as a testament to the atrocities wrought by the Syrian civil war. Thanks to the bravery and ingenuity of one former prisoner, the faded scraps were recently transferred to the United States Holocaust Memorial Museum…The remarkable documents were smuggled out of Syria by Mansour Omari, a 37-year-old human-rights activist. At the start of the war, Omari was working at the Syrian Center for Media and Freedom of Expression, where he was tasked with chronicling the cases of people who had been vanished by the regime of Syrian president Bashar al-Assad. In 2012, the organization’s office was raided and Omari was arrested. According to Avantika Chilkoti of the New York Times, he spent a year in several brutal detention centers, among them the notorious prison supervised by Maher al-Assad, the president’s brother.Although he had been robbed of his freedom and, as Witte reports, subjected to torture, Omari did  not stop in his quest to document the horrors taking place in Syria. Aided by four other inmates, he worked to record the names of his fellow prisoners on swatches of fabric that had been cut from the backs of their shirts. They used broken chicken bones as pens, and created “ink” by mixing rust from the bars of their cells with blood from their gums.”

“The poet Edward Thomas met one of the strangest deaths of the First World War.  On Easter Monday 1917, on the first morning of the Battle of Arras, a stray German shell passed so close to him that the rush of air fatally compressed his lungs.  He fell without a mark on his body.  Tucked away in the pocket of his greatcoat was his last diary (NLW MS 24030A), each page of which bears the imprint of the shell’s shock wave, an eerie arc of creases.” National Library of Wales blog: https://www.llgc.org.uk/blog/?p=4941 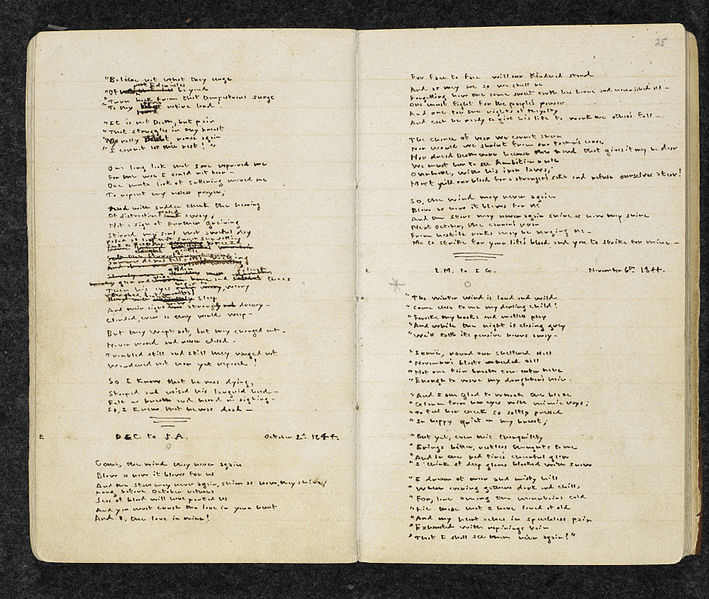 You are currently browsing the notebook category at kim trainor.